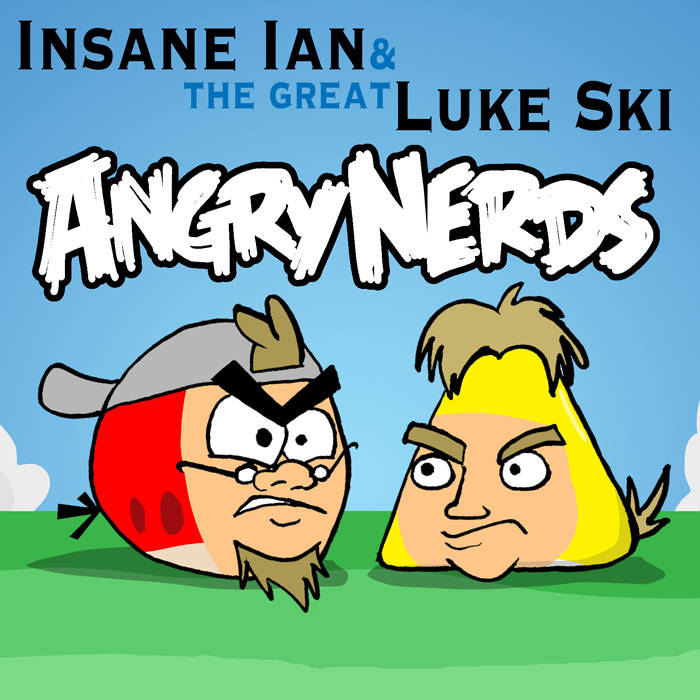 An original hip-hop song about over-negativity in fandom culture.

Doesn't it seem that, no matter how much cool things we have, someone always find something to complain about? Like, some people are FINALLY happy they got Spidey's costume right for The Amazing Spider-man 2, but will complain about how Electro looks in the movie.

Verse 1 - Ian:
You'd think that today, nerds’d surely be glad
There's more nerdy things now than I ever had
From TV to movies, books, games, and comics
There’s all kind of fandoms on all kinds of topics
But when they convert a nerdy thing to new media
The nerdy butt-hurt is almost immediate
A movie comes out, and they all begin blogging
They tear it to shreds, they give it a flogging
It’s such a disgrace, as the rage fills their face
Because someone changed a characters costume or race
They weather the leather of the clever books, ‘cause they’re “better”
They remember the splendor of every single last letter
If they change it too much, then they all cry foul
If they change it too little, then they throw in the towel
But then you’ll feel their wrath, in a Facebook thread
If you spoil Game of Thrones or The Walking Dead!

Chorus 1:
Angry Nerds! I understand your passion
But do you think that this warrants that kind of reaction?
Angry Nerds! They can be so rude
Whether reddit, 4-chan, or comments on YouTube
Angry Nerds! To them all things are sacred
There isn’t a thing that is not Mass Debated
All their talking sounds like squawking from some flightless birds,
slingin’ rotten eggs, here come the Angry Nerds!

Verse 2 - Luke Ski:
Once upon a time, in ‘99,
There was an 8-year-old, unaware of what’s online.
Saw “The Phantom Menace”, thought it was amazin’!
Identified with Ani and loved the podracin’.
Bought all the toys, saw the prequel’s sequels,
then went in search of some similar equals.
Found the Enterprise, either Data’s or Spock’s,
and a wacky madman in a bright blue box.
- Found wizards,(pirates,) web-slingers,
(nerdcore rappers,) and funny-song singers.
Now the kid’s 20-something, loving fandom each day,
All because no Angry Nerds crossed paths to say,
“Phantom Menace sucks!, and Jar Jar is dumb!,
and Jar Jar is dumb!, and did I mention Jar Jar is dumb?!,
and you’re dumb if you like it. No excuse!”
Way to kill the next generation, you douche!

Chorus 2:
Angry Nerds! Like a spoiled brat,
they take your wide-eyed wonder, then they squash it flat.
Angry Nerds! Throwing poop like Play-Doh,
swirling all around, like a giant snark-nado!
Angry Nerds! Think they’re Captain Kirk.
Well, spoiler alert, you’re just being a jerk.
Producing way more dookie than some Bantha herds,
I’ve got a bad feeling ‘bout these Angry Nerds!

Verse 3 - Ian and Luke:
Someone should summon the male nerds of the world
And stop them from questioning every single geek girl
And trying to validate if they have enough cred
And just simply treat them as equals instead!
Five episodes into “Agents Of S.H.I.E.L.D.”,
“I’m giving up on this show. Disappointing for real.”
It wasn’t “The Avengers”?! That’s your reason?!
How about giving it a chance for ONE SEASON?!?!
Michael Bay’s getting hate for his toy adaptations
Zach Snider’s derided for his hero machinations
But if there’s one thing all nerds can agree on
It’s that Uwe Boll is a gigantic peon
So when you’re watching some thing, and your knee-jerk kicks
that spawns your usual attacks…
Just repeat to yourself, “It’s just a show,
I should really just relax!”
Or you’ll be one of the-

Chorus 3:
Angry Nerds! Their bile can’t be abated.
Besides, you’re more hip if you say that you hate it.
Angry Nerds! While you’re Minecraft mining,
Why don’t you try looking for a silver lining?
Angry Nerds! Some bad news for you,
“The Big Bang Theory’s” funny ‘cuz it’s mostly true.
I know that it’s ironic as I say these words,
but this nerd is getting angry at these Angry Nerds!

Outro Spoken Word Banter:
(Spoken as Yoda) Fandom leads to anger, anger leads to hate, hate leads to suffering
Yeah, suffering through the constant complaining. Can’t these guys ever be satisfied?
(Still Yoda) The Dark Side is Quicker. Easier. More seductive.
Hey, you wanna knock off the Yoda impression? You’re making me…
Angry? Oooh, I’ll bet I wouldn’t like you when you’re angry.
That’s my secret, Luke. I’m always angry.